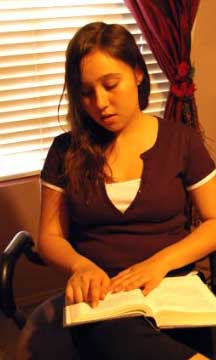 For this special Bat Mitzvah the girl wrote a special message to her family outlining what her faith and heritage means to her and what she is doing to prepare for her Bat Mitzvah.

After the event takes place, we will add the "party photos" to another page for family that could not attend or simply want to remember the special occasion.

This is especially important to her because much of the family and family friends live in Israel and will not be able to attend.

Bar Mitzvah - Bat Mitzvah Bonus Package:
A special time with special meaning for Jewish families.
Order a one page web site and we will add a page with the "Celebration Photos" FREE.

"Bar Mitzvah" literally means "son of the commandment." "Bar" is "son" in Aramaic, which used to be the vernacular of the Jewish people. "Mitzvah" is "commandment" in both Hebrew and Aramaic. "Bat" is daughter in Hebrew and Aramaic. (The Ashkenazic pronunciation is "bas"). Technically, the term refers to the child who is coming of age, and it is strictly correct to refer to someone as "becoming a bar (or bat) mitzvah." However, the term is more commonly used to refer to the coming of age ceremony itself, and you are more likely to hear that someone is "having a bar mitzvah."

Under Jewish Law, children are not obligated to observe the commandments, although they are encouraged to do so as much as possible to learn the obligations they will have as adults. At the age of 13 (12 for girls), children become obligated to observe the commandments. The bar mitzvah ceremony formally marks the assumption of that obligation, along with the corresponding right to take part in leading religious services, to count in a minyan (the minimum number of people needed to perform certain parts of religious services), to form binding contracts, to testify before religious courts and to marry.

A Jewish boy automatically becomes a bar mitzvah upon reaching the age of 13 years, and a girl upon reaching the age of 12 years. No ceremony is needed to confer these rights and obligations. The popular bar mitzvah ceremony is not required, and does not fulfill any commandment. It is certainly not, as one episode of the Simpsons would have you believe, necessary to have a bar mitzvah in order to be considered a Jew! The bar or bat mitzvah is a relatively modern innovation, not mentioned in the Talmud, and the elaborate ceremonies and receptions that are commonplace today were unheard of as recently as a century ago.

In its earliest and most basic form, a bar mitzvah is the celebrant's first aliyah. During Shabbat services on a Saturday shortly after the child's 13th birthday, the celebrant is called up to the Torah to recite a blessing over the weekly reading.

Today, it is common practice for the bar mitzvah celebrant to do much more than just say the blessing. It is most common for the celebrant to learn the entire haftarah portion, including its traditional chant, and recite that. In some congregations, the celebrant reads the entire weekly torah portion, or leads part of the service, or leads the congregation in certain important prayers. The celebrant is also generally required to make a speech, which traditionally begins with the phrase "today I am a man." The father traditionally recites a blessing thanking G-d for removing the burden of being responsible for the son's sins (because now the child is old enough to be held responsible for himself).

In modern times, the religious service is followed by a reception that is often as elaborate as a wedding reception. In Orthodox and Chasidic practice, women are not permitted to participate in religious services in these ways, so a bat mitzvah, if celebrated at all, is usually little more than a party. In other movements of Judaism, the girls do exactly the same thing as the boys.